This has to be one of the saddest books I’ve ever read. It has that tone of regret, missed opportunities, and misplaced priorities that Uncle Rico tried to express in Napoleon Dynamite, but without the humor.

Every page of this reeks of that “back in ’82” sentiment that things could have been different and “if coach woulda put me in 4th quarter, we’da been state champions, no doubt… no doubt in my mind.” Yet, in reality, no matter how great it could have been, and no matter how many state titles are won, the theme of this book is the common expectation among towns such as Odessa, Texas, that life peaks in high school. That’s the best it will ever get, and that most alumni will spend their lives looking back and accepting that myth.

One on hand, I couldn’t tell if the author was trying to bash the small-town “conservative” mindset, as he had plenty of opportunities to get in countless jabs, choosing which quotes to record and which to ignore. Yet on the other hand, I’m not sure he could help but report what he saw and what he heard, which was everywhere, and he did it with little or no personal commentary on what he was seeing and hearing. He was simply an observer.

And what he observed and recorded was the mindset of the players, coaches, and fans, which seemed to completely consume the town. A visit to the school’s athletic website in 2020 illustrates that they still maintain quite a bit of pride at being featured in this book. They see it as a compliment to their passion. I don’t believe most readers would see it that way.

Early in the book, in the preface, the following paragraph sums up the whole story of the Permian Panthers, and countless other high school football programs across the country: 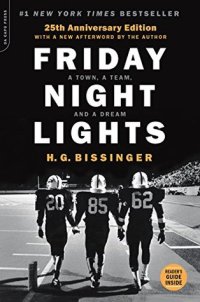 “Athletics lasts for such a short period of time. It ends for people. But while it lasts, it creates this make-believe world where normal rules don’t apply. We build this false atmosphere. When it’s over and the harsh reality sets it, that’s the real joke we play on people… Everybody wants to experience that superlative moment, and being an athlete can give you that. It’s Camelot for them. But there’s even life after it.”

This book is as well-written as it is depressing to read, and the style of writing with the behind-the-scenes portraits of each of the key players on the team and their lives on and off the field was ahead of its time as it was published in the late 1980s, before the deluge of show like “Hard Knocks,” “Last Chance U,” and “30 For 30” that are now the standard in sports documentaries.

Life and Other Disasters

A great site about books, TV, movies, life and other disasters just like it

Sophie's Corner
Waking up on the Wrong Side of 50

Navigating the second half of my life