This is not a time travel book, but it is written so well that I felt like a time traveler while reading it, feeling right at home in 1987. This story is packed with 80s nostalgia with countless references to pop music (Phil Collins, Whitney Houston, Howard Jones), movies (Crocodile Dundee, Some Kind of Wonderful, Back to the Future), video games (Galaga, Pac-Man, Gauntlet), and many other icons of the decade such as Miami Vice, Commodore 64, Alf, B. Dalton Booksellers, cassette tapes, and Vanna White.

With that said, the book is a little crass, and the language and subject matter is typical of the high school freshmen that the story is built around. The main premise of the book is the impossible pursuit of a Playboy magazine by three 14-year-old friends. And although the plot was predictable (except for the ending), I couldn’t put the book down because I was enjoying the flashbacks to the time without cell phones so much.

See, what I really liked was the angst between Will and Mary… the unresolved emotions and the reality of having to sit and think and sort out the feelings over longer periods of time in the midst of adversity and uncertainty without the luxury of texting or calling and getting an immediate resolution. There is something charming in that that is lost on the current generation. It builds character and patience. Tom Petty once sang that “the waiting is the hardest part,” and he’s right. That time is so valuable in building resolve. No current or future generation will ever know what that is like again. 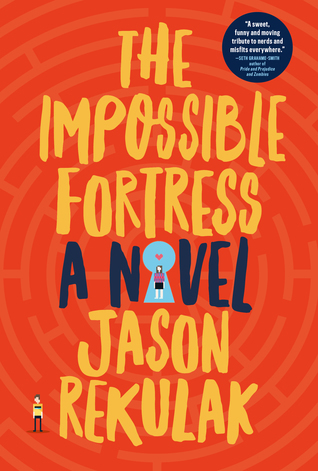 What I didn’t like was knowing all along that those three 14-year-old friends were going to break into Mary’s dad’s store, that Will was going to disappoint Mary, and that nothing was going to stop any of that from happening. It was like watching a train wreck in slow motion, knowing it can’t be avoided, but hoping everyone will be okay once it is over. I also didn’t like the unrealistic outcome of that situation (breaking and entering) after it happened.

But I still loved this book as a whole, and it was really cool that while Will and Mary were creating a video game all through the story (code included in each chapter!), the author includes a link to his website at the end of the book so that the reader can play the same video game from the book after finishing the story.

I would recommend this book to anyone who thinks fondly of the 80s. It felt like visiting an old friend.

One thought on “Book Review: The Impossible Fortress (Jason Rekulak, 2017)”

Life and Other Disasters

A great site about books, TV, movies, life and other disasters just like it

Sophie's Corner
Waking up on the Wrong Side of 50

Navigating the second half of my life